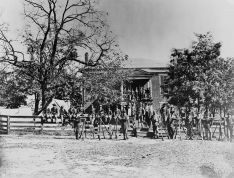 The folks who produce BBC History Magazine have just published a special issue called The American Civil War Story. I had a couple of pieces in it, including one that seeks to explain why the South lost the war in less than a thousand words. This is it:

Why the South Lost the Civil War

After his surrender at Appomattox, General Lee offered a succinct explanation for why they had lost. “After four years of arduous service, marked by unsurpassed courage and fortitude,” he told his men, “the Army of Northern Virginia has been compelled to yield to overwhelming numbers and resources.”In the years after the Civil War, white Southerners followed Lee’s cue, telling an emotionally powerful story of a heroic and noble struggle against overwhelming odds. If Lee was right, historians need not look south of the Mason-Dixon line to explain the war’s outcome: the answer is simply the old story of the biggest battalions winning. And that was certainly how things looked in the bitter final year of the war, when Grant and Sherman’s armies vastly outnumbered and outgunned increasingly rag-bag Confederate forces. The North clearly had advantages that, in the end, were brought to bear. But Lee’s explanation was too simple. After all, four years earlier, when the war broke out, most seasoned military observers in Europe gave the Union – a government with a tiny standing army — scant chance of militarily subduing the Confederacy, a territory the size of the whole of Western Europe. Americans, after all, could draw on their own history for lessons in how to establish an independent nation through war. Like their Revolutionary forebears in their struggle against the mighty British army, the Confederates could have won against superior odds because they had compensating advantages: a resilient population, talented military leaders, the advantage of fighting a defensive war in country they knew, and, above all, a cause for which the vast majority of white southerners were prepared to make great sacrifices. Jefferson’s grandson, George W. Randolph, expressed a common view in the South when he predicted in 1861, “the Yankees may overrun our frontier states and plunder our coast, but, as for conquering us, the thing is an impossibility…. History offers no instance of a people as numerous as we are, inhabiting a country so extensive as ours, being subjected if true to ourselves.”

If Randolph was right (and Lee at Appomattox was wrong), then the causes of Confederate defeat were internal rather than external. One set of “internal” explanations focuses on the political divisions that beset the Confederacy. According to this view, the Confederacy was hoist by its own petard: its devotion to de-centralized government, endless checks on executive power, and obsession with individual liberty undermined its unity and capacity to fight. Perhaps, in the historian David Donald’s striking phrase, the South “died of democracy.” Confederate President Jefferson Davis certainly faced plenty of opposition, but so did Lincoln. And what is more striking about the Confederacy is how much power the government in Richmond had, taking control of the railroads and munitions manufacturing, and impounding property—even including slaves—if it was deemed essential to the war effort. From nothing, the South created what was for a while one of the most effective and disciplined armies the world had seen.

Perhaps, then, the underlying failure of the Confederacy can be found fault lines in southern society. Did class tensions between slaveholding and non-slaveholding whites undermine the war effort? Were women on the homefront insufficiently committed to the cause? In fact, only in the final months, when Union military superiority became invincible did a failure of morale tangibly affect the ability of Confederate armies to resist. This was a resilient society prepared to make huge sacrifices. About 38 percent of southern men died in battle or of disease compared with only one in six of northerners who fought. The most convincing “internal” factor behind Southern defeat was the very institution that prompted secession in the first place: slavery. Enslaved people used the war to flee where they could. More than a hundred thousand ended up in Union army uniform. Nevertheless, without the incursions of the Union army and the collapsing capacity of the Confederacy to resist, slavery would probably not in itself have defeated the South. Slavery helped destroy the South primarily because of the incursions of the Union army, just as military defeats were often the cause of political division rather than the other way around.

If weaknesses in southern society don’t in themselves explain Confederate defeat, does that return us to Lee’s explanation at Appomattox—that the North was simply too strong? In a sense, yes, but with a crucial caveat: so long as the North remained determined to crush the rebellion by force, it was always likely that their superiority in manpower and resources would tell in the end. But would they remained determined? Was the North willing to pay the high price of victory? The Confederates certainly understood this. The only way the South could “win” the war was for the North to give up. And so, from the outset, the driving purpose of southern military strategy was to undermine northern morale, not just in their armies, but almost more importantly on the home front. Lee and Davis knew the North had more men and more industrial capacity, so they tried to attack their enemies where they were most vulnerable—popular commitment to the cause. Events on the battlefield, in other words, mattered at least as much for their impact on home front morale as on the strategic position of the armies. That was one reason for Lee’s “invasions” of Northern soil in 1862 and 1863. It was also why the Election of 1864, in which Lincoln was reelected, was as important a moment in the war as any battle. After catastrophic defeats in the Seven Days Battles, at Fredericksburg, or at Chancellorsville, or during the rising death toll in the summer of 1864, many Northerners simply felt that the cost of the war in human lives was simply too great. The North won the war because the idea of maintaining the Union was powerful enough to overcome those doubts. Lincoln played a role with his speeches, but so too did countless newspaper editors, clergymen, antislavery speakers, and ordinary families talking about why the rebellion had to be crushed. The North could very well have lost the war, but only if it had lost the will to win. And despite wobbles, they never did.

How to Write a History Essay