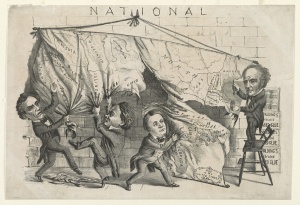 The 1860 Presidential Election was one of the most consequential elections in world history, since it directly triggered the American Civil War. (Others on the shortlist include the series of three Reichstag elections in 1932-3). It was in response to the election of Abraham Lincoln that the first tranche of slave states seceded, and Lincoln – with the overwhelming support of public opinion in the North – responded to secession with war. Lincoln didn’t need to do anything to prompt secession; it was enough that a Republican, elected entirely on the basis of the votes of the free states, had come to power. Although you’ll read otherwise on neo-Confederate blogs, Southerners at the time were not shy about telling the world that their motives were to protect slavery. One prominent Southerner, William Lowndes Yancey boldly (bravely? provocatively?) campaigned in the North during the 1860 election campaign, warning an audience in Boston (the home of antislavery politics) that while the South could concede on minor issues like tariffs, they would never yield over slavey, “the tool of our industry, the source of our prosperity”.

Lincoln faced a battle in the free states against fellow Illinoisan Stephen Douglas (“the little Giant” on account of his height and girth, as well as his political prominence) who ran well against him in the Midwest, but in the end won only one state (Missouri) outright. Meanwhile, in the slave states, there was an almost entirely separate election fought between another Democrat, John C. Breckinridge (whose supporters had “bolted” from the Democratic convention in protest at the nomination of Douglas) and an elderly Whig, John Bell, running under the banner of the Constitutional Union party. The latter’s solution to the crisis over slavery was to promise to say nothing and do nothing. This was a surprisingly strong pitch in some parts of the country: Bell won Virginia and a number of other upper South and Border states.

Lincoln won every free state apart from New Jersey (and since they split their electoral votes in New Jersey, a practice more common in the nineteenth century than it is now, Lincoln still got something). Even though Lincoln was not a contender in the South and polled less than 40% of the popular vote nationwide (the second lowest vote share of any victorious presidential candidate), he won because the North, by this stage, had more people, more states and therefore more votes in the Electoral College. If a Republican won this time, reasoned pro-secessionist Southerners, they could win again and again. Having basically controlled the Federal government since 1787, Southerners now felt, for the first time, as if they might be shut out forever, with people in charge who might as well be thieves since they didn’t accept the legitimacy of human property. As the New England “man of letters” James Russell Lowell put it, “The fault of the Free States in the eyes of the South is … the census of 1860.”

The bottom line was that the election exposed how far Northerners and Southerners had come to distrust and fear one another. Although the returns reveal that voters in both sections were divided (although Lincoln won handily, 45% of free state voters still opted for other candidates), they agreed on the basics. Northerners, whether Douglas or Lincoln voters, were sure that the South represented a threat to their freedoms, and Southerners, whether Breckinridge or Bell voters, thought that Northerners were a threat to their freedoms.

Elections are not (just) a neutral gauge of how people think, though. They also help to form and shape how people think. The campaigns in 1860 reinforced prejudices, played to people’s fears, and the results confirmed everyone’s assumptions. This election was a spectacular failure of democratic politics. Influential theories of how party systems are supposed to work would suggest that parties are supposed to compete for the middle ground. Well, they didn’t this time. On the contrary, the moderates were eclipsed.

Elections are faux war: people talk about campaigns, battles, strategy. In 1860, Republican “marching clubs” were set up that resembled, and were intended to resemble, military organisations. Rumours of real war were in the air. There have been other circumstances in which a divided country has been brought to a state of war by a (relatively) free and fair election — Spain in 1936 and Ireland in 1922 both led to Civil Wars within a few months. Firing bullets and casting ballots seemed, in all those cases, to be alternative routes to the same end.

I’ve been thinking about the 1860 election recently because I’m writing a paper for a conference at Princeton which aims to reconsider ways of integrating elections into an analysis of political history. This may seem a peculiar purpose for a conference: how can political history ever be without elections? One challenge, however, is to work out whether elections are just, essentially, a series of accidents, driven by charismatic leaders, luck, ‘events’. Does politics operate autonomously? Because if so, to understand elections we just need to do political hack-style analyses of who said what, when to whom. On the other hand, maybe elections are just the reflection of what’s going on in society as a whole and therefore we can ‘explain’ an election without needing to worry too much about what becomes the mere ephemera of day to day politics. Or more likely, the thing is to work out how these two levels of analysis interact. Is it possible to construct a model for understanding elections that pays attention both to structure and to agency? I think (part of) the answer is to understand politics in terms of the narratives that politicians construct to make sense of how people perceive their world. Effective stories are those that have emotional appeal, speaking to voter’s fears and sometimes their hopes, and which ‘make sense’ to them. Policy, economic interest or ideology — these things matter insofar as they are translated into an effective narrative.

Elections matter not as a series of random events, but because they are great case studies in how ‘events’ and ‘contingency’ and the actions of individuals can, in the right circumstances, make an extraordinary difference. The 1860 election is an extreme case, since it had such obvious results, but to a greater or lesser extent, the conclusions we can draw about 1860, apply more broadly.

A map showing the results of the election broken down by County. This was essentially two parallel elections, one in the North, the other in the South.

An image of John Bell supporters in uniform with transparency.

One thought on “Elections Have Consequences”

A Battle of Wills